Ladies, let’s all grab drinks in 2152, because that’s when the pay gap will finally close and we’ll finally make as much as men.

According to recent data from AAUW’s Fall 2016 report on the pay gap, it will take 136 years for women to reach pay equity with men.

The results show that progress on closing the pay gap has slowed — so much so that the latest projections indicate pay equity isn’t likely to be achieved until 2152 if the pace doesn’t improve.

While we celebrate, let’s take a look at what’s going on:

The Pay Gap Is Real – And It’s Actually Worsening

Progress was revving along at a pretty good clip, starting in 1960 after more women began going to college and entering the work force; however, that progress has since stalled.

But look at the rate of change in this century — from 2001-2015 — and the outlook darkens. Instead of picking up steam, the gap is growing more stubborn.

Yes, the pay gap continues to narrow, but the slower rate of change over the last 15 years pushes projected pay equity for women to 2152, or 136 years from now.

Whether the gap personally exists for you is likely far outside your reach. Besides wearing more makeup and negotiating your ass off, there’s little you can do to actually close it. (I only recommend the latter.)

Other factors, such as location, race and age seem to make more of an impact than whether or not you’re busting your butt at work and driving more results than your male counterparts.

Here’s what the AAUW report has to say:

Where You Live Makes a Difference

The report digs deeper to break down pay inequity across a number of demographics, and where you live has a big impact on how much you make. The average cost of living varies across the country, but women’s earnings aren’t exactly in line with the price of a gallon of milk. 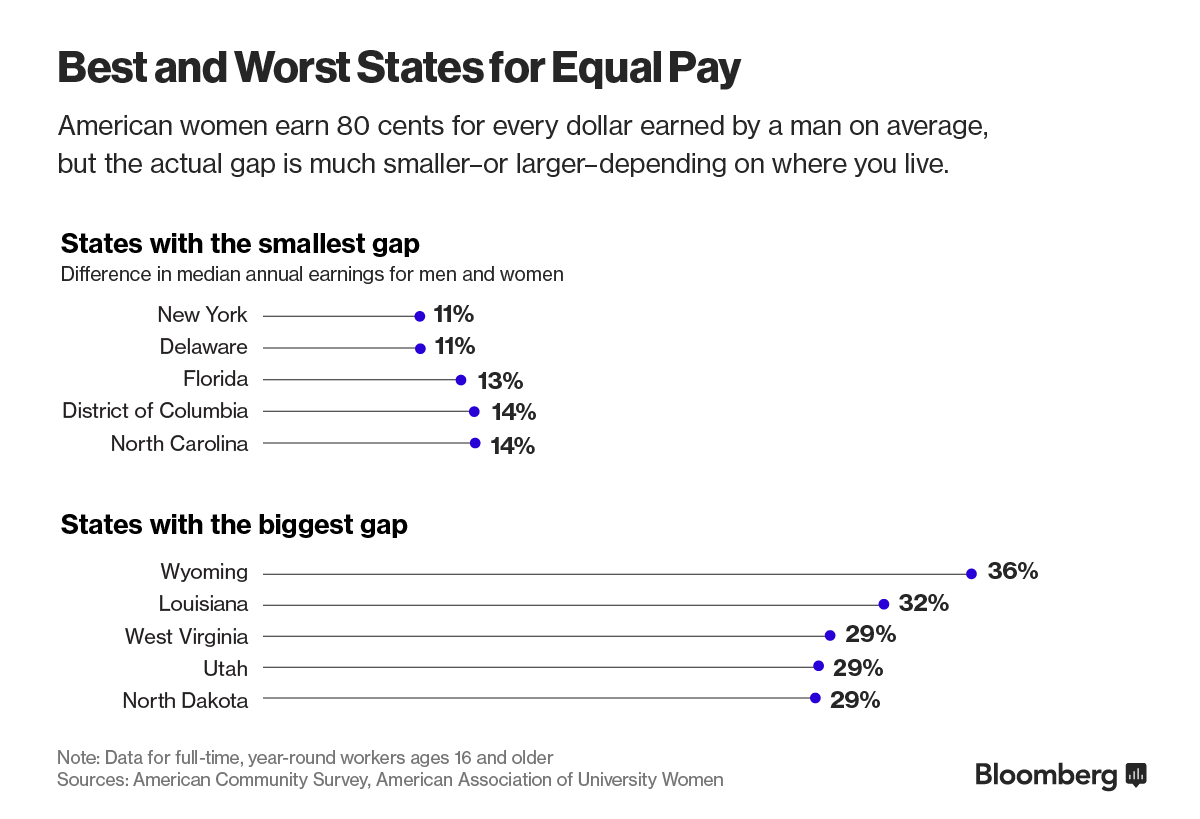 If you live on the East Coast, you’ll experience about an 11 to 14 percent pay cut thanks to your gender.

New York, Delaware, Florida, District of Columbia and North Carolina offer the most equitable pay for women in the country.

On the other hand, women in Wyoming will earn just 64 cents on the dollar of a man’s pay.

Louisiana, West Virginia, Utah and North Dakota round out the bottom five states, after Wyoming.

Ready to pick up and move? Don’t start packing just yet. Location isn’t the only factor determining your salary.

The report also breaks down earnings and the gender gap for different ethnic groups in different ways.

The pay gap was first analyzed by comparing women and men of the same racial or ethnic group. From this vantage point, Asian and white women experience the largest gender gap in pay, while Latina and African-American women earn 92 and 90 percent of what same-race men earn, respectively.

When comparing women of other races to white men — the dominant group in the work force — they fare much more poorly. In this case, Latina women earn just 54 percent of what the average white man earns; for an African-American women, it’s 63 percent.

The wage gap also widens as women age, meaning that these differences have a major and lasting impact on women’s lifetime earnings and ability to retire comfortably — or at all.

A woman earning less at the beginning of her career has less to invest, and less to raise in her annual review. The differences in both pay and accumulated assets magnify over time. The total effect: Women lose $430,480 over the course of a 40-year career.

Earning less in your working years means you’ll also qualify for fewer Social Security benefits — a gap exacerbated for women who take time off for unpaid maternity leaves. (Although only 13% of U.S. employees have the option of paid family leave.)

The odds are just stacked in our favor, huh?

Until then, keep climbing the ladder and #slaying your career. The pay gap ain’t got nothin’ on you.

Thoughts on the study? Let your feelings fly in the comments!

While you’re at it, head over here for some tips to help you negotiate a higher salary. And for more news and must-know information to boost your career, sign up for the Punched Clocks newsletter.